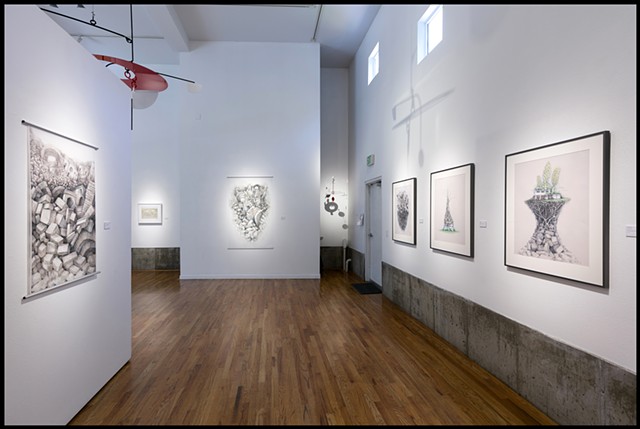 Doug Russell Doug Russell is a visual artist who lives and works in Laramie, Wyoming. His work has been exhibited in solo shows at the Missoula Art Museum, the Helen E. Copeland Gallery in Bozeman, MT, the Nicolaysen Art Museum in Casper, WY, the Leedy Voulkos Art Center in Kansas City, and the Urban Institute for Contemporary Arts in Grand Rapids, Michigan. His work has also been shown in numerous group exhibitions including The Big Draw at the William Havu Gallery in Denver, The Architecture of an Idea at the Alden B. Dow Museum of Science and Art, Evidence and Residues: An Investigation of Contemporary Drawing at Indiana State University, and three International Drawing Annuals (INDA) published through Manifest Creative Research Gallery and Drawing Center. His work is in several permanent collections, including The Museum for Architectural Drawing in Berlin and the Nelson-Atkins Museum of Art in Kansas City, Missouri. He is a Professor of Art at the University of Wyoming where he is coordinator of the drawing program and Head of the Department of Visual and Literary Arts.

Artist Statement Working within the tradition of the architectural capriccio, I build improvised and invented realities born out of my love of direct observational drawing and of architectural forms and organic structures. With fragments continually piling up, expanding, collapsing, and disappearing, and re-emerging – the imagery and process express the perpetual cycle of hopeful human construction and the inevitable erosion of intentions. This work began over twenty years ago while living and working in Turkey, a dense and layered landscape of ruin and renewal. The Ebb and Flow series aims to capture the compressed nature of this human physical history in all of its overlapping confusion. In the Upon all of their tomorrows… series I combined the more familiar (to me) Greek and Roman ruins of Turkey with new experiences among the ruins of the Angkor sites in Cambodia. My series The Persistence of Ruin uses layers of Mylar and Plexiglas to create an obscured atmospheric and deep space. The imagery combines content from my time in Turkey and Cambodia with newer sources from my travels in Bali and Java, Indonesia. In the most recent House Plant series I depict the familiar architectural vernacular of American ranch and split level suburban houses in bright sunlight and strong colors. The houses look new and essentially “un-ruined,” but they are not fit for human occupancy due to the explosion of plant life emanating from them. As with all ancient ruins, the houses have moved on from their intended purpose. The houses represent the initial and narrow view of human objectives and needs, now subverted and allowed to take on a new more expansive and non-human and post-human purpose. In addition to these drawing series, in my studio grows an ever evolving architectural model, entitled Styropolis, constructed from discarded Styrofoam and cardboard. This improvised architectural folly then acts as inspiration and source material (along with travel drawings, audio field recordings, and thousands of photographs). Recently I have begun taking stereoscopic photographs of Styropolis – often with other contemporary, historical, and art historical images projected onto the model.